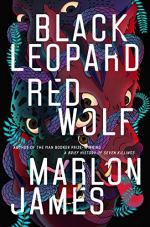 • Marlon James’s Black Leopard, Red Wolf is the first installment of a planned trilogy (the Dark Star trilogy). This graphic and violent epic is set in a fantasy-world drawn from African history and mythology and features a number of magical creatures, from shapeshifters to witches to vampires and beyond.

• NOTE: Due to the graphic nature of this novel, it should be noted that it may be triggering for many readers as the narrative delves into a number of particularly disturbing topics, including: graphic rape scenes, mental and physical abuse, misogyny, pedophilia, incest, torture, medical experimentation, homophobia and homosexual acts, human enslavement and sex-trafficking, and merciless violence and body mutilation.

• The narrative of Black Leopard, Red Wolf comes through a frame...