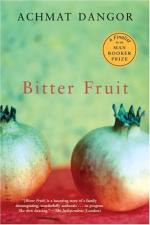 1. What excuse does Mikey make so he will not have to go to the hospital with his father?

2. Which part of his mother did Mikey find most attractive when he was a child?

3. Which of the following statements best describes the relationship between Lydia's family and Silas?

4. What does Lydia reveal about her relationship with Du Boise?

5. Which of the following characters is NOT one that Lydia realized could have been an assassin in her home?

1. How does Silas react to seeing Lydia's injuries after she steps on the broken glass?

2. What is the truth behind Mikey's parentage?

3. What unusual event happens when Silas is at the grocery store at the opening of the novel?

5. How does Mikey feel about reading his mother's diary?

6. What family arrives at Lydia's hospital bedside, and how do they get there?

7. How does the Ali family react to Silas's seizure?

8. What two revelations does Lydia make when the letter arrives to her from Martha in Toronto.

9. Why does Alec become so outraged that he must leave his bedroom and make himself a cup of tea?

10. Why does Kate begin to grow suspicious of her secret meetings with Mikey?

Even though he is dead at the time the novel is set, Ali Ali plays a large role in shaping the man Mikey becomes when he transforms into Michael. Explain Ali Ali's life story, and then explain why the knowledge of his family history has such a large effect of Mikey.

The novel "Bitter Fruit" is set in post-apartheid South Africa. Even though the apartheid is no longer happening, the residual effects of this ethnic segregation are still very present in the lives of the Ali family. Briefly explain how the apartheid affected the Ali family directly, and give two examples of the residual effects of segregation that continue to affect all the black Africans living in South Africa.

Throughout the novel, Silas's two work friends, Kate and Julian, have a large effect on the problems that happen in the Ali family. Briefly describe both Kate and Julian's characters as well as their relationships to Silas. Then, give one example for the ways each of these characters irrevocably change the relationships in the Ali family, leading toward their inevitable demise.