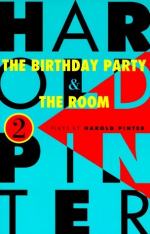 2. Where does Stanley put his gift from Meg after opening it?

3. What is the name of the person who brings in the parcel at the end of the first part?

4. What religion is Goldberg in the play?

5. What does Stanley tell McCann about Meg to explain her celebrating his birthday early?

1. How does Stanley react when Meg asks for a kiss?

2. What is the nature of Petey and Meg's conversation regarding the drum at the beginning of Act 3, Part 1?

3. What happens after Stanley is caught in a compromising position with Lulu near the end of Act 2, Part 3?

4. What does Meg say about breakfast at the beginning of Act 3, Part 1?

5. What is the nature of McCann and Goldberg's conversation regarding the newspaper at the beginning of Act 3, Part 2?

6. Describe McCann's appearance at the table at the beginning of Act 2, Part 1.

7. Describe the interaction between McCann and Lulu when he enters the room in Act 3, Part 2.

8. What is the nature of McCann and Stanley's conversation when the former will not allow Stanley to leave?

9. How does Goldberg react when McCann calls him Simey?

10. Describe the interaction between Goldberg and Lulu in Act 3, Part 2.

Analyze the nature of Meg and Petey's relationship in the play. What was the author trying to portray about their relationship? What is telling of their character by this portrayal?

Discuss the symbolism of the broken drum in the play. In what way might it have represented Stanley's emotional state?

Discuss the nature of Goldberg and McCann's relationship in the play. What seems to be the rapport between the two men? What motivates their relationship?