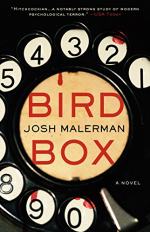 1. What is the first fatal incident reported by the media?

The first fatal incident described by the media was "the Russia Report," in which a man riding in the passenger seat of a truck asked his friend to pull over and attacked him, and then killed himself.

2. Where and with whom does Malorie live at the beginning of the novel?

Malorie lives with her sister, Shannon, in a rental property in a suburb of Detroit.

3. Where are Malorie and Shannon's parents?

Malorie and Shannon's parents live about nine hours north in the Upper Peninsula.

4. What are some of the things Malorie eats while pregnant?

5. Where is the safe house, which Malorie discovers in a newspaper located?

The safe house is located in Riverbridge.

6. How does Shannon die?

Shannon dies in the bathroom by stabbing herself with scissors through her shirt.