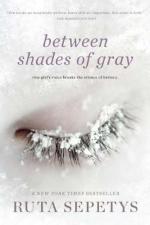 Ruta Sepetys
This set of Lesson Plans consists of approximately 140 pages of tests, essay questions, lessons, and other teaching materials.

1. What does Elena have Lina take Mr. Stalas?

2. What payment does the bald man ask in return for revealing the secret?

3. What is Lina going to be asked to do?

4. What does the old bald man say about himself?

5. What do the soldiers start throwing in the dirt?

1. Why does Elena collapse one day?

2. What news does Mrs. Rimas recieve in a letter and how is it coded?

3. How do the soldiers thrown out into the snow one day when Lina and Jonas are going to the kitchen and why do they eat the food immediately?

4. What does Elena reveal about Kretsky?

5. How do the others help Lina celebrate her sixteenth birthday?

6. What happens to Jonas?

7. Why do the soldiers pay no attention as the prisoners strip for a shower?

8. Why are Lina, Elena, and Jonas quiet about the potatoes he brings home that night?

9. What event makes Lina and Elena decide to stop asking for extra food for Jonas?

10. What do the prisoners learn about the Japanese and Hitler?

The fact that the priest is issuing last rites as the train pulls away from the station is a significant indication that others know what's happening to those on the train. This is another question that's asked repeatedly about the atrocities performed by Stalin and Hitler. Why didn't people object? There isn't an easy answer and this question, like the question of why so many went quietly to their deaths, is left to the reader to decide. Discuss the following;

1. How much power does an individual have to end atrocities such as that demonstrated in "Between Shades of Gray"?

2. What characters intervene in the misuse of power and how do they do so? What is the outcome?

3. Do individuals have a moral obligation to try to stop the misuse of power? What about in small ways, such as dealing with a bully?

4. Compare the misuse of power by a dictator to that by a school bully. How are they alike? Different? Is it likely a dictator was a bully as a young person?

1. Thoroughly analyze how the setting informs the plot in "Between Shades of Gray".

2. Trace and analyze one major theme of "Between Shades of Gray". How is the theme represented by symbolism? By the characters' behaviors? By the action?

3. Trace and analyze two secondary themes of "Between Shades of Gray". How are the themes represented by symbolism? By the characters' behaviors? By the action?

Between Shades of Gray belongs to the young adult novel genre. Discuss the following:

1. Define the literary term "genre" and give several examples of three other genres in addition to the young adult novel genre.

Between Shades of Gray from BookRags. (c)2022 BookRags, Inc. All rights reserved.