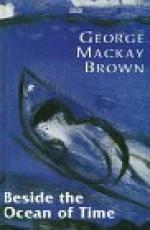 Beside the Ocean of Time Chapter Abstracts for Teachers

• Thorfinn Ragnarson is a schoolboy on the island of Norday, in the Orkney islands north of Scotland in the 1930s.

• Thorfinn lives with his father Matthew, who is a crofter/tenant farmer and his three sisters: Inga, Sigrid and Ragna.

• Thorfinn's teacher and most of the other islanders consider him a lazy, unintelligent child.
• Thorfinn drifts off during a school history lesson and creates a fantastic journey in his imagination.

• In his fantasy he is a Orkney boy travelling with Swedish Vikings centuries earlier on the ship the Solan Goose.

• The Vikings voyage to Russia where Thorfinn manages to save the day through a clever trick.
• The Vikings head down the Volga River towards Byzantium and are attacked by Cossacks.

• When they finally arrive in Byzantium, the crew is greeted warmly by a commander sent by the Emperor.

• The Emperor demands service from the Vikings for a...

More summaries and resources for teaching or studying Beside the Ocean of Time.

Beside the Ocean of Time from BookRags. (c)2020 BookRags, Inc. All rights reserved.