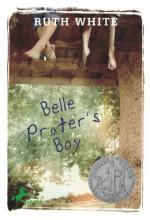 1. What did Gypsy find of her father's on the day that her mother married Porter?
(a) Cuff links that fell out of his suit pocket.
(b) His watch.
(c) His rare coin collection.
(d) A button from his volunteer fireman uniforms.

2. Which of the following is NOT how Gypsy perceives herself now?
(a) She is sullen.
(b) She is more social.
(c) She is more outgoing.
(d) She is no longer invisible.

4. Which of the following is NOT a characteristic that Gypsy has just as Belle did?
(a) She is athletic.
(b) She is imaginative.
(c) She is creative.
(d) She is musical.

5. What does the Ball family host every year at this time?
(a) An Ice Cream Social.
(b) A Fourth of July Barbecue.
(c) A Midsummer's Cotillion.
(d) A Summer Social Garden Party.

6. Who is Buzz?
(a) The local bully.
(b) Gypsy's second cousin from Alabama.
(c) The captain of the high school football team.
(d) The elementary school janitor.

8. What announcement does Porter make that happily surprises Woodrow?
(a) Porter knows where Bell is.
(b) The family is going to pay to have a doctor correct Woodrow's eyes.
(c) Woodrow is going on vacation to Hawaii with them.
(d) Woodrow has been granted a scholarship to college.

9. What is Woodrow doing in the tree house when Gypsy finds him in Chapter 14?
(a) Taking a nap.
(b) Spying on the neighbors.
(c) Reading comic books.
(d) Looking through personal ads.

11. What excuse does Gypsy give for her pixie haircut?
(a) It shows off her facial features better.
(b) It is better suited for cheerleading.
(c) It is popular in New York.
(d) It is a better cut for the Summer.

13. What does Woodrow tell the class about his mother?
(a) She is visiting her cousin, the Shah of Iran.
(b) She is traveling around the world.
(c) She is training to be an astronaut.
(d) She concocted a recipe for invisibility.

1. What is notable about the five guests?

2. What does Mrs. Cooper do when she is acting as if she is drunk?

3. What does Love say about Gypsy's hair?

4. What did Blind Benny do after his parents died when he was twelve?