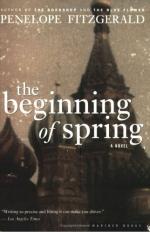 Penelope Fitzgerald
This set of Lesson Plans consists of approximately 176 pages of tests, essay questions, lessons, and other teaching materials.

2. While Charlie is out with Selwyn, Frank calls on Mrs. Graham again to ask about whom?
(a) Selwyn.
(b) Tvyordor.
(c) Lisa.
(d) Miss Kinsman.

3. When is the only time Lisa speaks at dinner?
(a) In response to a question.
(b) To pay a compliment to the meal.
(c) To ask a dish be passed.
(d) In correcting the children.

5. While Charlie is out with Bernov and Kuriatin in the latter's Wolseley car, Frank receives what at his office?
(a) A telephone call from Nellie.
(b) A wire from Nellie.
(c) A letter from Nellie.
(d) New official regulations.

1. What does the individual Frank finds at work after hours do upon being surprised?

2. Which of the children does Frank tell Dolly he plans take to meet Charlie?

3. What does Mrs. Graham suggest to Frank regarding Lisa?

4. When Charlie arrives, Frank promptly asks about Nellie and is told what?

5. At his home, Selwyn offers Dolly and Charlie a tea of sorts that he brews from nine herbs of healing, and that Dolly says are for what?