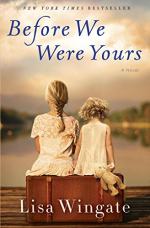 Before We Were Yours Short Essay - Answer Key

1. In the Prelude, how is the woman described who had a still birth?

The woman who had a still birth is described a a gentle fragile soul who was pretty. She was in the throes of childbirth, and she gave birth to a still born baby girl.

2. In the Prelude, what did a doctor recommend to Christine's father?

After Christine gave birth to a still born daughter, the doctor told Christine's father that Christine could never get pregnant again or it would kill her. He recommended that they contact a woman in Memphis who might be able to help.

3. In Chapter 1, who is Avery and what is background and career?

Avery is the daughter of a senator and his wife. She is 30 years old, and she graduated at the top of her class from Columbia Law. She works in the office of a U.S. attorney's office.