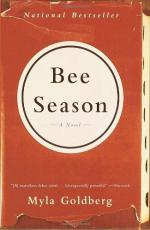 Myla Goldberg
This set of Lesson Plans consists of approximately 103 pages of tests, essay questions, lessons, and other teaching materials.

Torah - The first five books of the Old Testament. Also known as the Books of Moses.

Synagogue - A place of worship for Jewish people.

LSD - A hallucinogenic drug, used by many during the 1960s. It was thought to aid in the expansion of the mind.

Japa Beads - Meditation beads used by those who belong to the Hare Krishna religious movement.

Zamboni - A large machine used to resurface an ice rink.

Kaddish - A prayer that is part of the Jewish worship service.

Menorrah - A candelabrum with nine branches, most commonly used at Hannukah.

Challah - A special braided bread which is eaten on Shabbat (the Jewish sabbath).