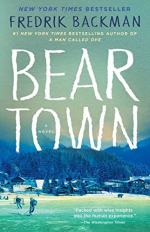 Fredrik Backman
This set of Lesson Plans consists of approximately 114 pages of tests, essay questions, lessons, and other teaching materials.

This quiz consists of 5 multiple choice and 5 short answer questions through Chapters 25 - 27.

4. In Chapter 25, the narrator describes "an old newspaper article about research showing that the part of the brain that registers physical pain is the same part that registers" what (200)?
(a) "Sorrow."
(b) "Jealousy."
(c) "Empathy."
(d) "Rage."

1. Who is the bully that picks on Amat and his friends in Chapter 7?

2. Who tells Amat that he can gave any girl at the party that he wants in Chapter 20?

3. How does the narrator say that Peter and Kira wake up in Chapter 23?

4. What is the name of the local bar that Robbie Holts waits outside of in Chapter 8?

5. Where does Kira work?