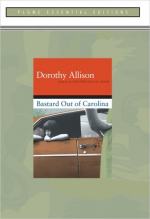 Dorothy Allison
This set of Lesson Plans consists of approximately 118 pages of tests, essay questions, lessons, and other teaching materials.

1. Where does Mama move herself and the girls after her family discovers that Bone has been abused by Glen?
(a) To an apartment over the Fish Market.
(b) To Alma's house.
(c) To an apartment by the railroad tracks.
(d) To Raylene's house.

3. Everyone who is expected eventually arrives for the funeral except for whom?
(a) D.W.
(b) Dwight.
(c) Tommy Lee.
(d) Travis.

4. At the end of the book, where does Bone think Mama will move to?
(a) Virginia or Kentucky.
(b) California or Florida.
(c) Maryland or Pennsylvania.
(d) Alabama or Georgia.

6. What Boatwright relative busts in on Bone and the sheriff without permission?
(a) Aunt Alma.
(b) Aunt Raylene.
(c) Uncle Beau.
(d) Uncle Nevil.

9. Aunt Alma's feet are "resting on a little pile of chopped black slats." What are the black slats?
(a) Clothing ripped to shreds.
(b) Pieces of tire.
(c) Pieces of a black cupboard.
(d) 45 rpm record fragments.

11. What leads to Alma's breakdown?
(a) The bank foreclosing on the house.
(b) Boone's beatings.
(c) Wanting a baby, but her husband refusing.
(d) The death of her sister, Ruth.

13. How does Bone spend her first days at Aunt Raylene's house after the assault?
(a) Crying.
(b) Sitting quietly on the front porch.
(c) Screaming at her aunt.
(d) In bed.

1. The special item that Bone fishes out of the river is carried home in a sack along with what?

2. Who does Bone take with her to break into Woolworth's?

3. When Sheriff Cole asks Bone who did this to her, what does she say?

4. What happens after Deedee refuses to go to the funeral?

5. Where is Aunt Alma when Glen shows up to talk to Boone?

Bastard Out of Carolina from BookRags. (c)2021 BookRags, Inc. All rights reserved.