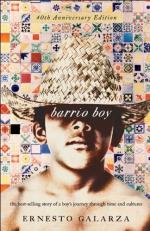 1. Why is Ernie not allowed in the party for the poor children?
(a) Because he is wearing shoes.
(b) Because he is not dirty and must not be poor.
(c) Because he did not have an invitation.
(d) Because he has not combed his hair.

2. What book does Ernie ask Mr. Howard to find for him?
(a) The Hardy Boys.
(b) Tio Tonche.
(c) Commentaries on the Common Law of England.
(d) The Three Little Pigs.

4. Where does Henriqueta's cousin suggest she save her money?
(a) With the church.
(b) Under her floorboards.
(c) With her cousin in a secret place.
(d) In the bank.

5. What American activity are the Mexican immigrants pleasantly surprised about?
(a) The Americans' laughter.
(b) The surprising amount of community activities.
(c) The rock n' roll music.
(d) Trash collection.

7. Who comes through Jalco with news of Gustavo?
(a) Josy.
(b) A man who used to live in Jalco too.
(c) A traveling salesman.
(d) A soldier.

10. What is the term used for Mexicans that have grown up in California?
(a) Pochos.
(b) Californians.
(c) Nunos.
(d) Papas.

11. Which animals did Ernie's family leave behind in Jalco?
(a) Relbmpago.
(b) Coronel.
(c) All answers are right.
(d) The hens.

12. Besides electricity, what other modern convenience does Ernie learn about when they arrive in Tucson?
(a) Street lights.
(b) Plumbing.
(c) Telegrams.
(d) Motor cars.

13. How does Ernie react when he sees the American soldiers helping people off the train?
(a) He is overjoyed.
(b) He is angry at the soldiers.
(c) He is frightened.
(d) He thinks it is exciting.

1. What type of instrument does Ernie buy from a pawnshop?

2. What is the Plaza de Armas?

3. What are supporters of Don Porfirio called?

4. What does Josy call the guerrilla soldiers that live in the mountains?

5. Why does Ernie think that people are worried about safety in Tepic?