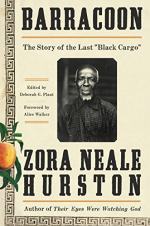 1. What is the penalty for killing a leopard and failing to bring the king its required body parts, according to Cudjo?
(a) 5 years in prison.
(b) A hefty fine.
(c) The loss of a wife.
(d) Death.

2. How long after a woman's husband dies is she allowed to wed, according to Cudjo when talking about his former community in Africa?
(a) Never.
(b) 1 year.
(c) 3 years.
(d) 2 years.

3. The owner of the Clotilde deceptively reported that the ship had been on a mission to retrieve what product?
(a) Slaves.
(b) Red palm oil.
(c) Opium.
(d) Sugar cane.

5. What are the names of Cudjo's twin great-granddaughters?
(a) Mary and Martha.
(b) Nancy and Nelda.
(c) Katie and Kimberly.
(d) Teresa and Taylor.

6. What objects are required to be brought to the king once a leopard has been killed, according to Cudjo?
(a) The eyes.
(b) The ears.
(c) The tail and heart.
(d) The whiskers.

12. From what type of implement does Cudjo always drink his well water?
(a) A tightly-woven basket.
(b) A china saucer.
(c) A tall glass.
(d) A homemade tin cup.

13. Whom does Cudjo name as the agent responsible for finding a man wives to add to his family?
(a) The man's first wife.
(b) A matchmaker.
(c) The man himself.
(d) The man's mother.

14. What sign does Hurston name as indicating that Cudjo is somewhere close by his house?
(a) His great-granddaughters are on the porch.
(b) The front door is standing open.
(c) There is a fire going in the fire pit.
(d) The front gate is unlocked.

15. Cudjo says that when a new wife comes to a house, she at first lives with whom until she gets her own house?
(a) The original wife.
(b) The pastor.
(c) The next-to-latest wife to be wed.
(d) The man.

1. Cudjo says that the daughter of a very rich man back in his community in Africa would install each of his daughters in a fat-house for what period of time?

2. Cudjo describes himself as being how old when his grandfather had died?

3. What does Cudjo name as his first inclination regarding the likely reason for the chief's decision to summon boys over the age of 14?

4. The King of Dahomey at the time of Cudjo's capture had what name?

5. Cudjo states that if a person were found guilty of murder in his former community in Africa, then what consequence would have been levied upon that person?

More summaries and resources for teaching or studying Barracoon.