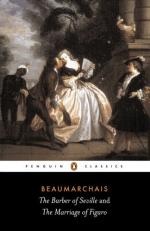 Pierre Beaumarchais
This set of Lesson Plans consists of approximately 161 pages of tests, essay questions, lessons, and other teaching materials.

This quiz consists of 5 multiple choice and 5 short answer questions through Act 3, Part 2.

1. For what does Figaro say he has come?
(a) To save Rosine.
(b) To shave Bartholo as usual, nothing more.
(c) To sing and play his guitar for Bartholo.
(d) To give his servants a shave.

2. As Figaro finishes singing his new composition, what does he realize about the "priest?"
(a) He looks unhappy.
(b) He looks familiar.
(c) He looks odd.
(d) He looks worried.

3. Why does Figaro leave Madrid and cheerfully wander through Spain?
(a) He realized the theatre life was not for him, so he went back to writing poetry.
(b) When he realized the audiences did not appreciate his work, he decided to write music for himself.
(c) He missed playing the violin, so he found work as a violin maker and salesman.
(d) When he realized that the critics were more interested in their own political in-fighting and were never going to welcome him.

4. What does Rosine do when she hears Bartholo coming?
(a) She panics.
(b) She faints.
(c) She becomes excited.
(d) She is nervous.

5. What does Bartholo say about putting trust in anyone?
(a) It is a good idea.
(b) It is a beautiful thing.
(c) It takes courage.
(d) It is dangerous.

1. Where does this story take place?

2. What does Rosine hand to Figaro?

3. The Count grabs his gun and does what?

4. At a performance of this play when it was first written, what expectations would the audience have had?

5. What does Figaro offer the Count?

More summaries and resources for teaching or studying The Barber of Seville.

The Barber of Seville from BookRags. (c)2020 BookRags, Inc. All rights reserved.