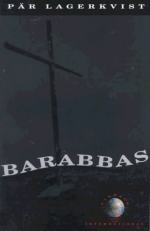 Pär Lagerkvist
This set of Lesson Plans consists of approximately 139 pages of tests, essay questions, lessons, and other teaching materials.

2. Where does Barabbas carry the hare-lipped girl's body?
(a) To the Red Sea.
(b) Through the Desert of Judah to the land of the Moabites.
(c) To the fat woman's house.
(d) Past Jericho and into Judah.

3. How does Eliahu die?
(a) Barbabbas hurls him off a cliff.
(b) The Christians stone him.
(c) The fat woman poisions him.
(d) The Roman crucify him.

4. What was inscribed on the back of Sahak's slave medallion?
(a) The mark of the Roman state.
(b) Symbols that represent Jesus' name.
(c) A cross.
(d) The name of the mine owner.

1. Whom does Sahak claim he belongs to?

2. Why does the overseer first whip Sahak?

3. Where is Barabbas sent after he is separated from Sahak?

4. What secret about Eliahu does no one know?

5. Why does Sahak believe he had been the recipient of a miracle?

1. What is Barabbas reaction to the true believer's action during the stoning?

2. What does Barabbas do after burying the hare-lipped girl?

3. After his initial whipping, what does Barabbas do while Sahak prays?

4. What heresy does the blind man accuse the hare-lipped girl of spreading?

5. What happens to Sahak after he speaks to the governor?

6. What does Barabbas think about as he carries the hare-lipped girl's body?

7. How does Barabbas suffer for the man who died in his place?

8. What about Barabbas amazes Sahak?

9. Why does the true believer cast the first stone at the hare-lipped girl?

10. How do Sahak and Barabbas end up standing trial in front of the governor?