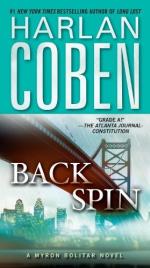 Objects & Places from Back Spin

Harlan Coben
This set of Lesson Plans consists of approximately 130 pages of tests, essay questions, lessons, and other teaching materials.

This is the golf course in Jack Coldren and Win's home town of Philadelphia. The U.S. Open is held at this location for the first time in years.

This is a motel specializing in hourly rates for illicit affairs.

Chad uses this facility near the Court Manor Inn before he is kidnapped but after both of his parents see him for the last time.

This is Norman Zuckerman's sportswear company, which has signed Tad Crispin and Linda Coldren as spokespeople for its new line.

The kidnappers' third call is made from a pay phone at the food court at this location.

This is the cul-de-sac where Chad's friend Matt lives.

Back Spin from BookRags. (c)2023 BookRags, Inc. All rights reserved.