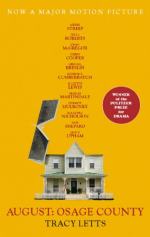 Tracy Letts
This set of Lesson Plans consists of approximately 127 pages of tests, essay questions, lessons, and other teaching materials.

1. How many times does Steve say he has been married before in Act 2?

2. The "Gordian Knot" that Bill alludes to in Act 2 is associated with what Greek king?

4. What does Steve claim he was doing when he was Jean's age in Act 2?

5. What is the final line that Barbara exclaims in the end of Act 2?

1. How does Violet feel about her circumstances in Act 3, Scene 5?

2. What is the significance of Ivy and Little Charles's placement in the dining room in Act 2?

3. What triggers the conflict between Barbara and Violet in Act 2?

4. What is the violence in Acts 2 and 3 representative of thematically?

5. What is revealed of Mattie Fae's character in Act 3, Scene 1?

7. What is the significance of Violet's story about the boots in Act 3, Scene 1?

8. How would you describe the character of Steve when he is introduced in Act 2?

9. What leads up to the physical conflict in the end of Act 2? How is this conflict described?

10. How is the theme of competition illustrated in Act 3?

Describe and analyze the character of Jean in the play. How old is Jean? How would you describe Jean's relationships with her mother and father? Whom does Jean become closest to in the course of the play? Why?

Discuss the theme of family responsibility in the play. How does this theme manifest itself through the major characters in the story? What characters have lacked or are lacking in their sense of responsibility for others? What symbolism relates to this theme?