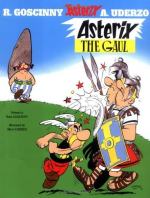 René Goscinny
This set of Lesson Plans consists of approximately 119 pages of tests, essay questions, lessons, and other teaching materials.

1. Describe the conditions in Gaul when the novel begins.

The Gauls have been conquered by Caesar and his Roman invaders. Peace reigns in Gaul between the Gauls and Romans, other than occasional German attacks. There is only one exception: a small Gaulish village in the Northwest region refuses to submit to Caesar and the Romans.

2. What happens when Asterix is hunting in the woods?

Asterix, a brave warrior, hunts in the woods, and four Roman soldiers attack the small man. Asterix defeats the four men. The four Romans report their humiliating defeat to the leader of Compendium, Centurion Crismus Bonus.

3. What is unusual about the Gauls to Crismus Bonus?

Crismus Bonus ponders on the superhuman strength of the Gauls, deciding they must have a secret to their extraordinary strength.

4. Why does Asterix remain unconcerned about the Romans possibly attacking him?

Asterix remains unconcerned about the Romans possibly attacking him because as long as he has the druid, Getaﬁx's, potion, the Romans can do nothing to him.