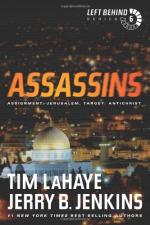 Tim LaHaye
This set of Lesson Plans consists of approximately 101 pages of tests, essay questions, lessons, and other teaching materials.

Create a journal from the point of view of one of the followers in the audience during Carpathia's last speech.

Carpathia's Condor and other planes are prevalent throughout the story. Learn about airplanes and jets.

Create a collage of items that might be found in Middle Eastern countries.

Create a sketch of Carpathia.

Create a newspaper complete with articles covering the press conferences and speeches given by Carpathia.

Learn about Revelation and the prophecy involved from both a religious and historical standpoint.

Create a trivia game based on the characters, places and things in the story.