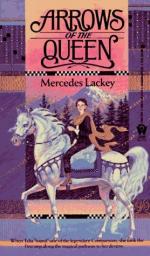 Arrows of the Queen Character Descriptions

This character's young life is spent at a restricted and closed in community called Sensholding until she is Chosen.

This character has golden hair and eyes the same color blue as the Companions and is no longer married.

This character is heir to the throne.

This character is a young man who was a thief before he was Chosen.

An aging Herald who has lost interest in life.

Rolan is Talia's Companion, the magical creature who chose her above all others in the land to be the Queen's Own. Rolan has the ability to see through Talia's eyes and their bond is rare and special. Rolan has the body of a horse, but is able to run further, longer and faster than a normal horse.

Both Heralds, these two have found love and companionship with each other...