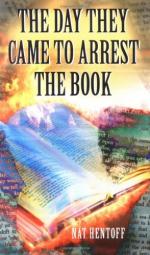 Nat Hentoff
This set of Lesson Plans consists of approximately 136 pages of tests, essay questions, lessons, and other teaching materials.

1. According to Griswold, who has the right to participate in the activities of pubic school systems?
(a) Any taxpayer.
(b) Members of the Parent Teacher Association.
(c) Anyone with a driver's licence.
(d) Students.

2. Who is Kent Dickenson?
(a) The father of a student in Nora's class.
(b) The debater from The American Civil Liberties Union.
(c) The school superintendant.
(d) A teacher at the school.

3. What position does Deidre Fitzgerald hold at the school?
(a) Librarian.
(b) Vice-principal.
(c) Art teacher.
(d) Math teacher.

5. In Matthew's story, what was the topic of the speaker's speech?
(a) The marvels of the body.
(b) The mysteries of the universe.
(c) The miracles of the mind.
(d) The essence of the soul.

7. Who is Hugo Black?
(a) A Supreme Court Justice
(b) A school janitor.
(c) A student in Maggie's class.
(d) A participant in the debate.

11. According to Nora Baines, what or who had been a victim of assaults in the previous school year?
(a) Library books.
(b) Members of the glee club.
(c) The chairs in the cafeteria.
(d) The school mascot.

12. According to Nora, how did Principal Moore deal with controversial books?
(a) He would encourage students to read them.
(b) He would tear out the pages with offensive content.
(c) He would let the P.T.A. decide what to do.
(d) He would ask Mrs. Salter to remove them from the library.

13. Which of the following describes Deidre Fitzgerald?
(a) A short, heavy-set woman with glasses.
(b) A petite, fashionable woman.
(c) A tall, slender woman with a kind voice.
(d) An elderly woman with short hair.

14. Who is Carl McLean?
(a) The leader of the Parent Teacher Association.
(b) A student in Nora's class.
(c) The school superintendant.
(d) Gordon's father.

15. In a class discussion, what does Kate note about authors?
(a) Authors are not all male.
(b) Authors are free to write whatever they want to.
(c) Authors don't make much money.
(d) Authors often use pseudonyms.

1. How does Maggie hope to get her students to learn to think for themselves?

2. What is the name of the school the students attend?

3. What nickname do Barney and Luke have for their principal?

4. What is supposed to happen when complaints are made about books in the school library?

5. How does Barney say Kate gets her fun?

More summaries and resources for teaching or studying The Day They Came to Arrest the Book.

The Day They Came to Arrest the Book from BookRags. (c)2021 BookRags, Inc. All rights reserved.