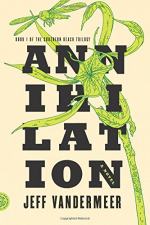 1. What does the first expedition report about Area X?
(a) All of the wildlife had been killed by something.
(b) Alien lifeforms.
(c) Nothing out of the ordinary, just wild and untouched wilderness.
(d) All of the trees were burnt down.

2. What is the first thing that the biologist notices when she enters the tower the second time?
(a) The tower is breathing.
(b) There is something watching them.
(c) There is the smell of a dead body.
(d) The stairs are covered in glitter.

3. How does the biologist characterize her husband's behavior upon his return from Area X?
(a) He could not stop screaming.
(b) He would constantly describe the strange things he saw.
(c) He was extremely gregarious.
(d) He seemed distant.

1. What important feature of the terrain is missing from the expedition's maps?

2. Which member of the expedition is missing at the beginning of 02: Integration?

3. What does the biologist see as she stands watch at night in 02: Integration?

4. Which member drops out before they even enter Area X?

5. What does the anthropologist do when they return to base camp in 01: Initiation?

1. What do the surveyor and biologist realize when they exit the tunnel in 02: Integration?

2. What does the psychologist plan to do while the surveyor and biologist explore the tower in 02: Integration?

3. Describe the black boxes that each member of the expedition is given.

4. Why did the Southern Reach stop issuing firearms for a while after the third expedition?

5. What is the moaning sound that the expedition hears in Area X?

6. What does the anthropologist's body look like when the biologist finds her in the tunnel?

7. In 02: Integration, what is the biologist's theory about what happened to the anthropologist?

8. What commonalities did the narrator notice when looking through interview materials from the participants of the 11th expedition?

9. What do the biologist and the surveyor find when they develop the pictures they took in the tunnel?

10. Why did the members of the 12th expedition not know about the Tower/Tunnel ahead of time?