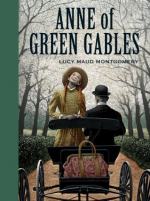 1. What does Anne tell Marilla when Marilla asks her what her name is?
(a) Amelia
(b) Cordelia
(c) Christiana
(d) Aliana

2. What profession did Anne's parents have?
(a) librarians
(b) the owned a general store
(c) college teachers
(d) high school teachers

3. What is Anne remorseful about concerning Mr. Phillips?
(a) She regrets judging him and writing a poem about him.
(b) She regrets talking, drawing pictures of him and making fun of him.
(c) She regrets telling horrible things about him to Marilla.
(d) She regrets passing notes during the class.

4. What has Anne never tasted which she hopes to eat at the Sunday school picnic?
(a) chocolate brownies
(b) ice cream
(c) strawberry shortcake
(d) lady's fingers

5. How does Anne win Mrs. Rachel Lynde over?
(a) Anne agrees that she is skinny with carrot red hair
(b) Anne makes an apple pie and takes it to Mrs. Lynde.
(c) Anne flatters Mrs. Rachel Lynde.
(d) Anne drops to her knees with a dramatic apology

1. What does Anne do when Marilla accuses her of losing Marilla's amethyst brooch?

2. What does Mrs. Barry tell Diana Anne can do for Diana's birthday?

4. What do all the girls in the class do when Mr. Phillips gives his farewell speech?

5. What kind of dress does Anne wish she could have?

1. How does Anne ask Mrs. Lynde to forgive her for calling Mrs. Lynde rude, impolite and unfeeling?

2. What is Anne all excited about in Chapter 13 and why?

3. When Anne reminds Marilla that she has been at Green Gables for one year what does Marilla say and what does she think in her heart?

4. What disaster happens when Marilla has the new minister and his wife to tea?

5. Why does Anne refuse to run over to Diana's to borrow Diana's apron pattern?

9. Why is Marilla hesitant to ship Anne off to live with Mrs. Peter Blewett?

10. How does Anne save the day and become reunited with Diana Barry in Chapter 18?