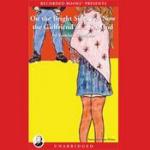 Angus, Thongs, and Full-Frontal Snogging; On the Bright Side ... Chapter Abstracts for Teachers

Louise Rennison
This set of Lesson Plans consists of approximately 147 pages of tests, essay questions, lessons, and other teaching materials.

• Georgia talks about what is wrong with her life. She worries about her appearance, and feels that her home and her family aren't good enough. She is trying to change her life because of an article she read in her mother's Cosmo about finding happiness.

• Georgia dressed as an olive for a costume party, and regrets it. Her friend Jas wasn't any happier there, but at least the boys paid attention to her. Georgia is insulted when Jas says the boys ignored her because her costume was goofy.

More summaries and resources for teaching or studying Angus, Thongs, and Full-Frontal Snogging; On the Bright Side ....

Angus, Thongs, and Full-Frontal Snogging; On the Bright Side ... from BookRags. (c)2021 BookRags, Inc. All rights reserved.