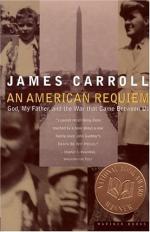 1. What does James do a week before entering the novitiate?
(a) He begins to write a religious-based novel.
(b) He meets with Allen Tate to show him several of his poems.
(c) He prays about what his calling truly is.
(d) He dates the Vice-President's daughter and tries unsuccessfully to have sex.

2. Why will a local Catholic priest not bury Tate's son, Michael?
(a) The Protestants are fighting to bury him.
(b) Michael is not actually Tate's son.
(c) Tate is a divorced Catholic.
(d) Tate is not a Catholic.

3. When Kennedy is assassinated, what does Johnson take over?
(a) The war.
(b) The Democratic Party.
(c) The administration and the war.
(d) The presidency.

4. Why do countless Air Force chaplains attend in full dress?
(a) James is in the Air Force.
(b) They have nothing else to do.
(c) They are friends with James.
(d) James is a general's son.

1. Who is the FBI resolved to bring down?

2. James' appointment with Tate is interrupted by what personal tragedy the night before?

3. These priests focus on a defensive Catholic Church and a hostile American culture.

4. By the will of whom does Diem rule Vietnam?

5. Despite years of religious training as an altar boy, catechism and religion classes, how is James regarding the Bible and theology?

2. How is Father Daniel Berrigan caught?

3. How does James feel about his calling as both priest and poet?

4. What is James' opinion of segregation and white supremacy as a child?

5. Why does the President begin to reject escalation of the war and refuse any use of nuclear weapons?

6. Why does James have a hard time promising to obey and respect Cardinal Cooke and his successors?

7. How is James' friendship with Patrick Hughes significant?

8. What is the tone difference between Robert F. Kennedy and J. Edgar Hoover?

9. Father James continues to have struggles with his vocation and decides to spend the summer on retreat in the Holy Land to reconsider his vocation. How does this trip help him make a decision about being a priest?

10. Who are the Paulist Fathers?