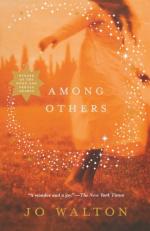 Among Others Chapter Abstracts for Teachers

Jo Walton
This set of Lesson Plans consists of approximately 133 pages of tests, essay questions, lessons, and other teaching materials.

• There is a legendary "Phurnacite" factory in the town of Abercwmboi, which has apparently ruined the surrounding area with a foul smell and a blight which has killed trees and vegetation.

• At the start of the novel, Morwenna and her twin sister Mor have traveled to this factory to cast magical flowers into a pool that will kill the evil factory.

• The headline in the newspaper the next day informs them that the Phurnacite factory is closing its doors, so the magic did work.
• Flash-forward four years later, to 1979; Morwenna (now fifteen and walking with a cane) has run away from her mother, traveling from Wales to England to live with her father.

• Morwenna meets her three half-aunts; England is a dreary and decidedly unmagical place with terrible food, and Morwenna is forlorn...

Among Others from BookRags. (c)2020 BookRags, Inc. All rights reserved.