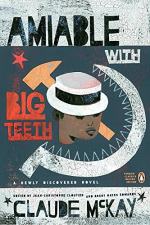 Claude McKay
This set of Lesson Plans consists of approximately 111 pages of tests, essay questions, lessons, and other teaching materials.

1. Where does Augustus Nordling work?

2. In Chapter 16, when did Jean Danou visit Russia?

3. What does Tasan flavor with liquor when he and his party visit the Airplane in Chapter 16?

4. What does Bunchetta say that Seraphine specialized in for her education?

5. When did Queen Judith ascend the throne of Ethiopia?

1. In Chapter 16, why is the work of Hands to Ethiopia at a standstill?

2. What happens to Castle when the Sufi and Senegambians get involved in the demonstration in Chapter 10?

3. What does Seraphine's mother tell her about carrying on with white men in Chapter 17?

6. In Chapter 14, why does Alamaya say that he can no longer see Seraphine?

8. In Chapter 13, what were the goals of the Hands to Ethiopia group?

9. What is the Interlink?

10. Why does Seraphine tell Dandy that they cannot stay with Bunchetta in Chapter 18?

Although not an invited guest, Professor Koazhy joins in the parade and speeches at the beginning of the novel. How is Professor Koazhy’s presence significant? What is the importance of what he says to the audience? Why is he a pivotal character in the proceedings in the first chapter?

The Labor Herald frequently publishes propaganda. How is propaganda use by the communists to further their cause? How does the use of propaganda affect the people who are targeted by the propaganda?