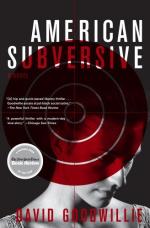 2. What does Carter say is the goal of the group in which he's involved?
(a) To protest acts that contribute to sustainable lifestyles.
(b) To bring attention to environmental offenders.
(c) To make as much noise as possible.
(d) To state an opinion.

3. Which days does Aidan see his handler?
(a) Sundays and Tuesdays.
(b) Wednesdays and Saturdays.
(c) Mondays and Thursdays.
(d) Tuesdays and Fridays.

4. What floor is the apartment on where Keith and Paige stay while they're preparing for the bombing of the Indigo offices?
(a) Fourth.
(b) Eighth.
(c) Thirteenth.
(d) First.

5. How long does Aidan tell his mother it will be before he arrives at her house?
(a) Two hours.
(b) Fourteen hours.
(c) Four hours.
(d) An hour.

6. Which of the following is a fact Touche and Aidan learn about Paige from Brendan?
(a) She has become involved in a radial activists' group.
(b) She left her job because of Bobby's death.
(c) Her parents live in North Carolina.
(d) Her brother Bobby was killed in Iraq.

8. Where are the architectural plans left in the apartment?
(a) In the closet.
(b) In a tv dinner box in the freezer.
(c) Under a loose floorboard in the bedroom.
(d) Under the couch.

10. What does ELF stand for?
(a) Earth, Liberty, and Freedom.
(b) Earthly and Literal Freedom.
(c) Even Less Freedom.
(d) Earth Liberation Front.

11. What does Paige say there are six of on the surface of the moon?
(a) Sources of water.
(b) Apollo landing gears.
(c) American flags.
(d) Major craters.

13. Where are the headquarters of Indigo Holdings?
(a) Madison Avenue.
(b) George Street.
(c) The Financial District.
(d) Washington, D.C.

14. What is the problem with Indian Point as a target?
(a) No one will care if they bomb it.
(b) The company has gone bankrupt.
(c) There's no way to gain access.
(d) There is uranium on the grounds.

15. When did Paige last see Bobby alive?
(a) On the day of his deployment.
(b) When she'd left for college.
(c) When he was on leave at Christmas.
(d) A week earlier during a reunion.

1. What is inscribed on the duffel bag given to Paige?

2. How many locks are on Aidan's door?

3. Why does Paige return to help Carter start a fire at the paper mill where they've planned an Action?

4. What food does Keith bring when he returns the morning after he and Paige make their final plans for the bombing?

5. When Aidan looks out his window the morning after receiving the photo of Paige, what does he see that isn't usually there?

More summaries and resources for teaching or studying American Subversive.