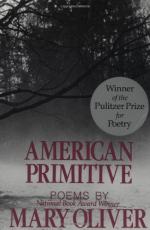 Mary Oliver
This set of Lesson Plans consists of approximately 120 pages of tests, essay questions, lessons, and other teaching materials.

1. What is the central theme in the first four poems?

The first four poems all center around the theme of natural elements and the causes of nature.

2. What does the narrator of 'August' accept during the poem?

During her search for blackberries in 'August', the narrator explains that her body is accepting itself for what it is seeing in the peace and natural state of the woods.

3. What is the ironic idea included in 'Mushrooms'?

The ironic idea included in 'Mushrooms' investigates the contrast between innocence and danger as the mushrooms look innocent but can actually be poisonous and kill the unwary glutton.

4. In 'The Kitten', what does the narrator feel as she buries the kitten, and why?

As the narrator buries the kitten in the earth, she feels a deep sense of peace because she knows that she is returning the dead baby to its real mother- the Earth.