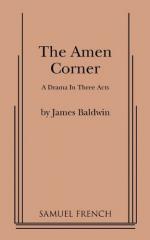 James Baldwin
This set of Lesson Plans consists of approximately 116 pages of tests, essay questions, lessons, and other teaching materials.

2. Who are Odessa and Sisters Moore and Boxer talking about when Act II opens?
(a) David.
(b) Ida Jackson.
(c) Margaret.
(d) Luke.

3. According to Luke, when did Margaret "find the Lord"?
(a) After having a stillborn child.
(b) After David was born.
(c) After her wedding to Luke.
(d) After she kicked him out of the house.

5. Odessa encourages Margaret to return to the church towards the end of Act II for what reason?
(a) To prepare her sermon.
(b) To attend a business meeting.
(c) To see an upset parishioner.
(d) To pray for Luke.

6. What character brings up the costs of operating a church during Act II?
(a) Odessa.
(b) Margaret.
(c) Sister Moore.
(d) Sister Douglass.

8. In Act II, Brother Boxer insinuates that the congregation paid for what household item?
(a) A washing machine.
(b) New furniture.
(c) Food.
(d) Frigidaire refrigerator.

10. What did Odessa do to buy the household item in question?
(a) Took care of other peoples' children.
(b) Secretarial work.
(c) Scrubbed white folks' floors.
(d) Cooked for people.

14. What concern does Sister Sally bring up to the others during Act II?
(a) Why they had to pay so much for a window.
(b) Why David hasn't been in church.
(c) Why they can't move to a better building.
(d) Why the pastor hadn't visited a sick parishoner.

15. When Margaret returns from her trip in Act II, where does she go first?
(a) To check on Luke.
(b) To get a drink from the refrigerator.
(c) Looking for David.
(d) The church.

1. Who says in Act II, "The way that box is going, you wouldn't of hear the Holy Ghost come in"?

2. In Act II, what does Luke call the baby the he and his wife lost?

4. When Margaret was delivering their baby, where was Luke?

5. What is on the record album that David is playing?