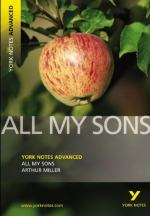 All My Sons Chapter Abstracts for Teachers

• Larry's tree has fallen in the Kellers' lawn.

• Ann Deever is in town visiting the Kellers.

• Frank and Jim get called away by their wives.

• Mother enters and talks about her reminders of Larry.

• Chris says that it is time to get over Larry.

• Mother tells Joe that they cannot give up hope on Larry.

• Ann discusses how she no longer talks to her imprisoned father.

• Ann tells Kate that she doesn't think that Larry is alive.

• Joe and Ann discuss her father's scandal during the war.

• The family decides to have a big dinner out that night.

All My Sons from BookRags. (c)2021 BookRags, Inc. All rights reserved.