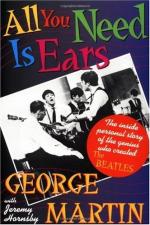 All You Need Is Ears Test | Mid-Book Test - Hard

George Martin
This set of Lesson Plans consists of approximately 148 pages of tests, essay questions, lessons, and other teaching materials.

1. George Martin guesses he was how old when his family got a piano?

2. After attending a concert, George Martin met Eric Harrison, a musician who played which instrument?

3. What reason did George Martin offer, in Chapter 1, for marrying his first wife, Sheena?

4. Chapter 1 begins with George Martin waking up where?

5. Chapter 4 opens with George Martin's discussion of what, and its relationship to sound and music?

1. Why did George Martin have trouble plugging "Love Me Do", which only reached number 17 on the charts?

2. Why did the Beatles stand up George Martin in 1964, as described in Chapter 1?

3. How does George Martin describe the collaborative writing style of John Lennon and Paul McCartney?

4. Relate one anecdote from George Martin's early career at Parlophone, as described in Chapter 3.

5. Why did George Martin's childhood piano lessons end after only eight sessions, and how did he continue to improve his skill?

6. Why does George Martin value the inability of the human voice to stay completely in tune?

7. At the beginning of Chapter 4, what were George Martin's criticisms of what he described as a lovely villa in Portugal?

8. What events led to the purchase of Capitol Records by Sir Joseph Lockwood, and what artists did EMI gain as a result of the purchase?

10. Why, according to George Martin in Chapter 2, is pop music not a step down from classical?

Compile a list of famous names in "All You Need Is Ears" that may be unfamiliar to Americans or to younger readers. Create a brief byline for each person, indicating why he or she is famous. Should subsequent editions of the book contain footnotes, elaborating on these celebrities' claims to fame?

Compare and contrast George Martin's descriptions of alcohol consumption by many of the comedic and musical acts he recorded in his early days at Parlophone, with his descriptions of illegal drug use by the Beatles.

Although "All You Need Is Ears" is an autobiography, the technique of foreshadowing is sometimes used by George Martin. For example, Chapters 1 and 2 both end with strong hints of what will happen in Chapter 3: the beginning of George Martin's career in the recording industry. What other examples of foreshadowing occur in the book?

More summaries and resources for teaching or studying All You Need Is Ears.

All You Need Is Ears from BookRags. (c)2022 BookRags, Inc. All rights reserved.