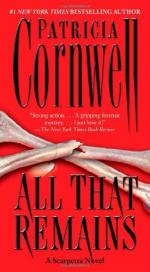 Patricia Cornwell
This set of Lesson Plans consists of approximately 159 pages of tests, essay questions, lessons, and other teaching materials.

1. What do Marino and Scarpetta think about the cemetery location?
(a) The killer knew the bodies would be found quickly.
(b) The location was a mistake.
(c) The killer's car was running out of gas.
(d) The killer was sending a message.

2. Where are the bodies of Jill Harrington and Elizabeth Mott found?
(a) In Jill Harrington's apartment.
(b) In a rest stop bathroom.
(c) In a cemetery.
(d) In a motel room.

3. Who is Detective Montana?
(a) He works with Marino.
(b) A member of the VICAP team.
(c) A specialist with the FBI.
(d) A police investigator.

5. Where is the last place Elizabeth Mott and Jill Harrington were seen together?
(a) A Super 8 Motel.
(b) The Anchor Bar and Grill.
(c) A convenience store.
(d) The Smoke Shop on the Green.

9. What is Scarpetta's relationship with her rescuer who leads her to Wesley's house?
(a) Former lover.
(b) Former medical student.
(c) Cousin.
(d) Former patient.

10. What does Pat Harvey learn about her husband from an article in the Washington Post?
(a) He is a former CIA agent.
(b) He was drunk in a bar the night Deborah disappeared.
(c) He has always resented Pat's political aspirations.
(d) He is having an affair.

11. What does Scarpetta see when she enters The Dealer's Room?
(a) She sees stacks of old, faded playing cards.
(b) She recognizes the bartender from the Globe and Laurel.
(c) She doesn't recognize anyone in the place.
(d) The man who approached her in the restaurant parking lot.

12. What does Abby Turnbull notice on the car driven by the stranger who approached them in the restaurant parking lot after dinner?
(a) A large scrape on the bumper.
(b) A Quantico sticker on the bumper.
(c) A Colonial Williamsburg parking sticker.
(d) The rear bumper is a different color.

13. What is The Dealer's Room?
(a) A small pub right outside of Williamsburg.
(b) A small bookstore.
(c) A small shop that sells antique playing cards.
(d) A small business that trains car dealers.

15. Who rescues Scarpetta when she gets lost looking for Wesley's house?
(a) Pete Marino.
(b) Pat Harvey.
(c) Benton Wesley.
(d) Mark James.

1. In Chapter 10, who does Scarpetta suspect might be the serial killer?

2. Where does Mark James live?

3. Who is the person Scarpetta invites to visit her in the summer?

4. What activity has the CIA been banned from carrying-out since the Ford Administration?

5. Who did Marino interview after Steven Spurrier is arrested?

More summaries and resources for teaching or studying All That Remains.

All That Remains from BookRags. (c)2021 BookRags, Inc. All rights reserved.