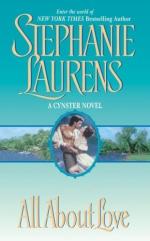 Stephanie Laurens
This set of Lesson Plans consists of approximately 122 pages of tests, essay questions, lessons, and other teaching materials.

1. What is Lucifer trying to make Phyllida Tallent understand on their way home from the manor?
(a) That she should be very careful when alone.
(b) That he wants to kiss her.
(c) That she tells him everything she knows about the murder day.
(d) That she should have a male escort.

3. Why does Silas Coombe visit Lucifer?
(a) He wants to see the manor.
(b) He wants to know where Phyllida Tallent is.
(c) He wants to have tea with Lucifer.
(d) He wants some of Horatio Welham's books.

4. Who among the following men is NOT courting Phyllida Tallent?
(a) Grisby.
(b) Silas Coombe.
(c) Basil.
(d) Cedric Fortemain.

5. Whom does Phyllida Tallent decide to check on first after the tea is over?
(a) Percy Tallent.
(b) Lady Huddlesford.
(c) Frederick Huddlesford.
(d) Mrs. Flemmings.

6. Who is the sole beneficiary of Horatio Welham's estate?
(a) Lucifer.
(b) Robert.
(c) Phyllida Tallent.
(d) Mary Anne.

10. Who throws an impromptu party at the grange?
(a) Sir Jasper.
(b) Lucifer.
(c) Lady Huddlesford.
(d) Phyllida Tallent.

15. Who confronts Lucifer with the impression that he ( Lucifer) is the murderer?
(a) Silas Coombe.
(b) Grisby.
(c) Cedric Fortemain.
(d) Basil.

3. What is the main reason Lucifer and Phyllida Tallent travel to the east?

4. Whom does Phyllida Tallent accidentally hurt with a weapon?

5. Who comes to Phyllida Tallent's rescue when she is assaulted?

More summaries and resources for teaching or studying All About Love.

All About Love from BookRags. (c)2022 BookRags, Inc. All rights reserved.