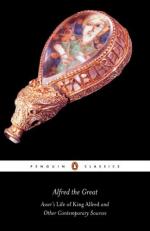 Anonymity
This set of Lesson Plans consists of approximately 115 pages of tests, essay questions, lessons, and other teaching materials.

During King Alfred's reign, the kingdom of Wessex was protected against Viking conquest. As a result of this battle, England was unified.

2. What was King Alfred's significance to the kingdom of Wessex?

Alfred's reform efforts during his reign began after he defeated the Viking army at Edington in 878. He created a defense system for the kingdom, changed procedures of government, and started institutions of learning. After again defeating the Vikings by 896, Alfred focused the remainder of his reign on reform, allowing his successors to extend their power over areas that were once in danger from the Vikings which led to English unification. It was these achievements that led to Alfred's title "the Great."