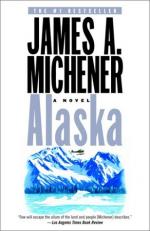 James A. Michener
This set of Lesson Plans consists of approximately 90 pages of tests, essay questions, lessons, and other teaching materials.

2. What happened to Arikov's claim?

3. Alaska became what state of the union?

5. Where did Tom spend Christmas?

1. What effect did the gold rush have on Alaska?

2. How were native Alaskans treated by the United States government?

3. What were some of the dangers the characters in Chapter 8 faced?

4. Describe the journey to the mines.

5. Why did the natives feel betrayed?

6. How did Tom benefit from the miners in Chapter 9?

7. What did World War II do to Alaska's infrastructure?

8. What effect did cabotage have on businesses and individuals?

9. Why did Ah Ting disappear?

10. How did Matt Murphy make his living when he arrived in Nome?

How did religion play a role in Cidaq's life? Talk about how it was part of her relationship with Rudenko as well as Voronov. Address how she felt about it personally.

Alaska is a land rich in natural resource. Define three major resources found in Alaska, and explain how each find impacted the people of Alaska.

More summaries and resources for teaching or studying Alaska.