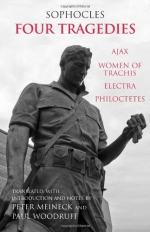 1. Where is Odysseus when Athena appears to him?

3. Who confirms Odysseus' suspicions that Ajax slaughtered a herd of cattle?

4. What does Athena say she will do to Odysseus before having Ajax appear?

5. Who does Ajax tell Athena that he thinks he has captured, and will torture?

7. Who does the Chorus believe spread a rumor about Ajax slaughtering cattle?

8. What does the Chorus believe has afflicted Ajax?