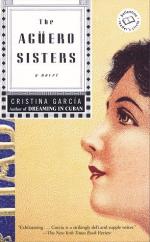 Cristina Garcia
This set of Lesson Plans consists of approximately 138 pages of tests, essay questions, lessons, and other teaching materials.

Create a list of Spanish words that were used throughout the course of the novel and create a glossary of their translations into English.

Many of the characters in this novel grew up living on a pig farm. Do some research and write an essay explaining what a day in the life of a pig farmer would be like and present it to the class.

Have students write a scene giving the novel an alternate ending. What might they change? How might the message of the novel be different?

Draw a picture of any two characters and, at the bottom of the picture, include a few quotes which you feel best represent that character's personality.

More summaries and resources for teaching or studying The Aguero Sisters.