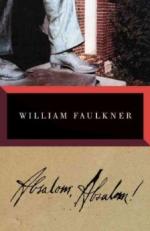 2. Why does Sutpen get arrested?
(a) He does not pay his taxes.
(b) He cheats Ikkemotubbe out of his land.
(c) He kills a man.
(d) The town believes he stole his home furnishings.

4. What does Judith Sutpen witness as a child that her mother did not want her to see?
(a) A horse being killed.
(b) A Civil War battle.
(c) Her father fighting with his slaves.
(d) A hanging.

9. Upon hearing that Judith is engaged, what does Rosa offer to teach Judith?
(a) How to make a wedding dress.
(b) How to read.
(c) How to keep a ledger.
(d) How to keep house and manage other domestic matters.

11. What is the name of the woman who tells Quentin the story of Thomas Sutpen?
(a) Ellen Sutpen.
(b) Ellen Coldfield.
(c) Rosa Coldfield.
(d) Judith Sutpen.

14. What happens when Stupen and his bride emerge from the church after their wedding service?
(a) They are presented with gifts from the townspeople.
(b) They find that their carriage has been stolen.
(c) Angry townspeople throw dirt and rotten vegetables at them.
(d) Sutpen is arrested.

1. Who posts bond so Sutpen can be released from jail?

2. Where is the visitor who Henry brings home for Christmas from?

4. In Chapter 2, which characters are talking about the story of Thomas Sutpen?

5. In what year does Thomas Sutpen arrive in Jefferson?