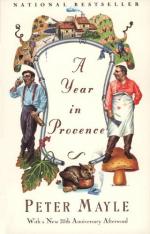 Daily Lessons for Teaching A Year in Provence

Peter Mayle
This set of Lesson Plans consists of approximately 121 pages of tests, essay questions, lessons, and other teaching materials.

The first conflict in the novel is the Mayles' encounter with the Mistral winds from Russia. These winds have a powerful effect on the people and climate of Provence. The objective of this lesson is to research the Mistral winds and their effects online or in the library and research the effect of other major winds in the world, for example the Mediterranean Sirocco wind and the Foehn wind of central Europe.

1.Divide the class into three groups. Have each group represent one of the above three major winds. Require each group to research the wind of their choice online or in the library. Let each group describe the effects of the wind they chose on the people and climate affected by that wind. Is their wind more or less destructive than the other winds? Does it affect the people more or less than the...

More summaries and resources for teaching or studying A Year in Provence.

A Year in Provence from BookRags. (c)2020 BookRags, Inc. All rights reserved.