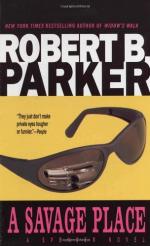 1. What does Spenser notice as he and Candy are leaving Summit Studios?
(a) There is a camera in their vehicle.
(b) Richard Hammond is arguing with his secretary.
(c) His cell phone is missing.
(d) They are being followed.

2. What does the person look like who is waiting near Candy's car in Chapter 7?
(a) He is a blond man.
(b) She is a teenager with braces and stringy hair.
(c) He is a bald African-American man.
(d) She is a short redhead.

3. What does Spenser do after breakfast in Chapter 3?
(a) Completes a crossword puzzle.
(b) Goes for a run.
(c) Checks his email.
(d) Goes to a gym.

4. Where does Spenser stay during Candy's recovery?
(a) In the apartment above her garage.
(b) Next door at Mickey's.
(c) In his hotel.
(d) In her house.

6. Where do Spenser and Candy share drinks after their meeting with Roger Hammond?
(a) On her balcony.
(b) As they walk along the beach.
(c) In a hotel bar.
(d) At a cocktail party.

7. What does Mickey do at the end of Chapter 3?
(a) Gives Spenser a business card.
(b) Tries to hit Spenser.
(c) Tells Candy to look into Summit Studios.
(d) Buys Spenser's meal.

11. Under what circumstances do Candy and Spenser leave Roger Hammond's office?
(a) They leave out a back door.
(b) They are kicked out by Hammond.
(c) Hammond walks them to the parking lot.
(d) Hammond's secretary tells him he has an appointment.

12. Where does Candy go to meet the person who called her on the day that Spenser arrived in town?
(a) A cafe.
(b) The parking lot of Wal-mart.
(c) The zoo parking lot.
(d) The airport.

13. Who walks Spenser and Candy to their car when they leave Summit Studios?
(a) Security guards.
(b) A secretary.
(c) Roger Hammond.
(d) Mickey Rafferty.

15. Who does Spenser intend to tell about his and Candy's late night activity the night before they visit the Oceania offices?
(a) Richard Hammond.
(b) Mickey Rafferty.
(c) Detective Odell.
(d) Susan.

1. Why do Spenser and Candy stop at the Farmer's Market in Chapter 7?

2. Who do Candy and Spenser go to visit the day after their visit to Roger Hammond?

3. What is Roger Hammond's job?

4. What does Spenser hear that causes him to drive around the corner at the end of Chapter 7?

5. Why do Spenser and Candy return to his hotel before she goes back to work, after her recovery?