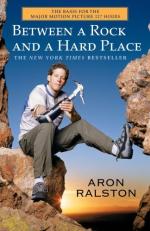 A Rock and a Hard Place Quiz | Eight Week Quiz B

Aron Ralston
This set of Lesson Plans consists of approximately 148 pages of tests, essay questions, lessons, and other teaching materials.

This quiz consists of 5 multiple choice and 5 short answer questions through Chapter 3 "The Night Shift".

1. What happens when Ralston attempts to hammer the blade with a large rock?
(a) The rock flicks the knife into a hole at his feet.
(b) The rock wedges the blade into the boulder.
(c) The rock breaks to pieces in his hands.
(d) Ralston misses and creates a large bruise.

2. The boulder that pins Ralston's arm is compared to what in size?
(a) A Volkswagon Beetle.
(b) A bus tire.
(c) An oven.
(d) A refrigerator.

3. To keep some form of control, what is one relatively trivial thing Ralston does?
(a) Ralston tidies up the dust and rock pieces off his arm.
(b) Ralston puts on his hat.
(c) Ralston neatly rearranges his belongings into his pack.
(d) Ralston continuously ties knots, undoes them, and ties them again.

4. What conservationist author does Ralston and the other hikers admire?
(a) Edward Abbey.
(b) John Muir.
(c) Theodore Roosevelt.
(d) Rachel Carson.

5. With what famous gang does the person bearing this region's name run with?
(a) Harris's Cattle Ranchers.
(b) The Crazy Bunch.
(c) The Wild Bunch.
(d) The Wild Westerners.

1. Who is the region in which Ralston is trapped named after?

2. What does Ralston drop when he attempts to place it safely into his pack with the swollen hand?

3. What is the name of the first "fourteener" Ralston climbs with his friend?

4. What is the average survival time without water in the desert?

5. Who is Ralston's best friend that climbs his first "fourteener" with him?

More summaries and resources for teaching or studying A Rock and a Hard Place.

A Rock and a Hard Place from BookRags. (c)2021 BookRags, Inc. All rights reserved.