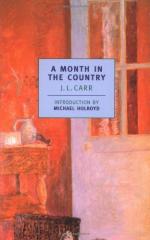 A Month in the Country Chapter Abstracts for Teachers

• A train stops at the station platform in Oxgodby, England.

• Thomas Birkin steps off the train and looks at his map.

• A girl stares at Birkin from the station house and Birkin imagines she is looking at his coat, a pre-war herringbone tweed.
• The stationmaster offers Birkin an umbrella, but he says he can dry out when he gets to the church.

• Birkin arrives at the church and speculates the area probably has not seen a medieval wool boom.

• The church is modest and seems to be in good repair with no leaks.
• The graveyard attached to the church has 18th century tombstones.

• Birkin sees a stone floor, two aisles, and a chancel beyond.

• There is scaffolding in the chancel's arch and Birkin climbs the ladder attached to the scaffolding.
• Birkin thinks about everything Rev. J.G. Keach has told him.