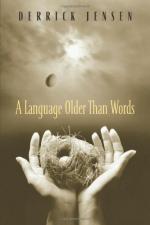 A Language Older Than Words Chapter Abstracts for Teachers

Derrick Jensen
This set of Lesson Plans consists of approximately 110 pages of tests, essay questions, lessons, and other teaching materials.

Silencing; Coyotes, Kittens and Conversations; and Taking a Life

• Jensen introduces the idea that people make up lies to cover up the atrocities that people do to one another.

• He indicates that he believes that humans are self-engrossed and self-indulgent.

• Jensen notes the way that scientists would cut the vocal cords of animals they experimented on so that they would not hear the animals screams.

• Jensen believes humans would like to silence the rest of the world.
• Jensen writes about the conversations that he believes he has had with the coyotes that live on his property.
• Death is the main topic discussed in this chapter.

• Jensen also discusses the idea that sex and violence are often associated in modern culture.

• In the chapter Cultural Eyeglasses, Jensen writes about the cultural eyeglasses that each of us is given by society to guide how we perceive...