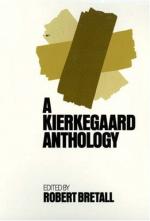 Lesson 1 (from Chapter 1, The Journals)

Kierkegaard, author of the Kierkegaard Anthology, was a Danish philosopher who had a significant influence on the development of 20th century philosophy and psychology. The objective of this lesson is to examine the life and work of Soren Kierkegaard.

1) Independent Work: Students should find answers to the following: Who was Soren Kierkegaard? What was his upbringing? Education? Work? What kind of relationship did he have with Regine Olsen?

3) Group Work: Students will discuss the following. Soren Kierkegaard was the father of existentialism.

4) Homework: Based on his education, do you think that Kierkegaard had the knowledge to influence philosophical thought? Theological thought? Why...