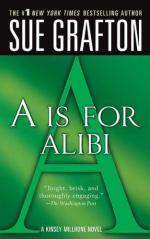 A Is for Alibi Chapter Abstracts for Teachers

Sue Grafton
This set of Lesson Plans consists of approximately 187 pages of tests, essay questions, lessons, and other teaching materials.

• She lives and works in the town of Santa Teresa, California.

• One day a woman named Nikki Fife is waiting for Kinsey outside her office.

• Kinsey recognizes Nikki from a trial eight years before.

• At that trial, Nikki had been convicted of killing her husband, Laurence Fife.

• She spent eight years in jail.

• Nikki maintains she is innocent.

• Nikki had been convicted on the strength of a diary she kept about Laurence's activities.

• She had followed him and recorded what he did because he was cheating on her.

• Kinsey agrees to take the case, but she is not optimistic about the outcome for Nikki.

• Kinsey goes outside to take a photo for another case and mulls over Nikki's request.

• She remembers that Laurence Fife was a divorce lawyer who...

More summaries and resources for teaching or studying A Is for Alibi.

A Is for Alibi from BookRags. (c)2021 BookRags, Inc. All rights reserved.