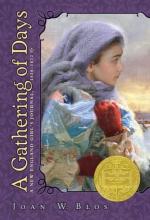 A Gathering of Days Chapter Abstracts for Teachers

• A GATHERING OF DAYS is a journal written by Catherine Cabot Hall, who is thirteen years old when she begins in 1830.

• Catherine lives with her father and sister, Matty, in Meredith, New Hampshire.

• Catherine's mother and baby brother both died in childbirth.

• Catherine's best friends are Cassie Shipman and her brother, Asa.
• Catherine sees an apparition in the woods and tells Cassie and Asa about it.

• Uncle Jack and Mr. Hall disagree on what should happen to runaways.

• Mrs. Shipman helps Catherine and Matty with preparation of food that can be stored for Thanksgiving.