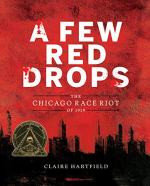 Claire Hartfield
This set of Lesson Plans consists of approximately 115 pages of tests, essay questions, lessons, and other teaching materials.

1. At the end of Seventeen: "Race Riot, how many of those who attacked blacks were arrested?

3. In 1919, what nieghborhood was bordered by Pershing to the north, Wentworth to the east, and Halstead to the west?

5. In Ten: "Northern Fever," where did the police confiscate the Defender?