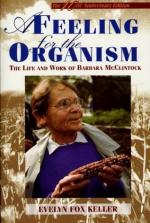 A Feeling for the Organism: The Life and Work of Barbara McClintock Quiz | Two Week Quiz A

2. Who was the President of the Carnegie Institution that Demerec urged Barbara to go talk to?
(a) Vannevar Bush.
(b) Salvador Luria.
(c) Marcus Rhoades.
(d) Charles B. Davenport.

3. Who's number of year-round investigators hovered around six and eight?
(a) Cornell.
(b) Columbia.
(c) Harvard.
(d) Cold Spring Harbor.

5. How does an anatomist see chromosomes?
(a) As representing a chemical structure and a genetic code.
(b) As very small rod-shaped bodies possibly present in all cells.
(c) As a property of the organism.
(d) Through a math formula.

1. In Hanson's informal notes concerning Barbara, he claims that she weighed approximately how many pounds?

2. In 1941, how many geneticists did Cold Spring Harbor draw?

3. What did Barbara McClintock receive her PhD in?

4. In what year was the Recent Advances in Cytology published?

5. In 1933, Barbara received a Guggenheim Fellowship to go where?

More summaries and resources for teaching or studying A Feeling for the Organism: The Life and Work of Barbara McClintock.

A Feeling for the Organism: The Life and Work of Barbara McClintock from BookRags. (c)2021 BookRags, Inc. All rights reserved.